This year’s GE user conference for the EMEA area customers and partners was hosted in Wembley-London. The three founding partners of Keronic – Kees, Robin and Nick – attended the event from 8th till 10th of October. It was the first appearance of Keronic at such event.

During the three days of the conference the partners of Keronic attended to many presentations and visited stands at the exhibition area. Most solutions demonstrated were focusing on (Advanced) DMS, OMS, APM (Assets Performance Monitoring), DER (Distributed Energy Resources) and the Digital Field Worker. A common factor binding these systems is the fact all are using data originating in the GIS. 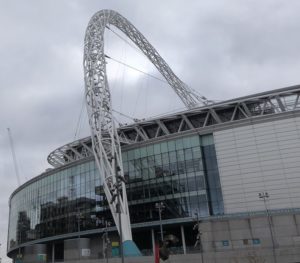 A noticeable trend, although never explained explicitly, is that the fact that the GIS is destined to be positioned in the heart of the IT landscape. Building on this trend, Keronic foresees aneven stronger role for the GIS system acting as a data provider for many other systems like ERP, DMS, BPM and microgrid controllers. Unlike in traditional ERP systems, the asset’s digital twin, including topology, can be modelled in the GIS. This will lead to huge benefits for the grid operator.

In the Netherlands, where some grid operators have been at the forefront of this trend, the GIS is already being used for planning and designing changes of the network. This includes the schematic registration of the network. This schematic representation of the network is consumed by other systems, avoiding data duplication and multiple points of data entry in those systems. De facto the GIS is promoted to master of network asset data. Keronic strongly believes this trend will quickly find adoption with other grid operators.

The fast-paced change of the energy transition and digital transformation creates new challenges for the grid operators, who themselves are already suffering from internal challenges like aging assets, aging workforce and shortages on technical staff. The energy transition will force changes in the distribution network in the next 10 years, more so than it has changed over the previous 100 years. Both GE and Keronic believe that technological innovations will be essential to overcome these challenges.